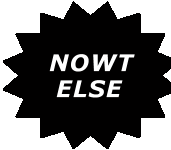 It’s 6 months on, which means it’s time for another update to my autobiography of MS.

The first thing to report is that unfortunately my PA carer Angie didn’t work out and we mutually agreed to a parting of the ways shortly after the last update was posted. It wasn’t particularly anyone's fault. It was just our personalities didn’t mesh. Because of this I’ve run, or is that rolled on, for the last 6 months with my long standing carers; that’s right-I never let them sit down, I’m an evil slave driver.

Looking back it wasn’t the ideal situation, as 2016 was not my best year and my brother was getting more and more psychologically drained working with me, leading to a bit of a circle of negativity between us, which didn’t help my non-positive reactions and habits. Fortunately both Vern, Yvonne and Tasha all stepped up to do extra days, especially from mid-October to mid-December, which helped my brother out a lot and enabled him to do the care successfully at Christmas, when Vern, Yvonne and Tasha all took some well-deserved time off.

To strengthen the care team, so that my brother can take the less stressful, well at least theoretically less stressful, role of backup carer, we have since Christmas been recruiting. I use the term we have been recruiting because in a sense we still are, because the recruiting process has not been as simple and straight forward as we would have hoped.

Starting with the interviews,

Interviewee 1: Did not turn up, no explanation given.

Interviewee 2: Cancelled as got another job elsewhere, fair enough.

Interviewee 3: Cancelled less than an hour before interview.

Following the interviews we appointed interviewee 5 to a 2 day post and interviewee 4 to the position of bank carer, who would be available to cover annual leave and sickness. Both posts were accepted when offered.

Unfortunately on the first day interviewee 4 was meant to cover annual leave, they just didn’t turn up, no explanation given, leaving me in the lurch and my brother having to do 2 days unexpected care. If they had said no they didn’t want this role then fine, but just not turning up really surprised me as its really rude and could have left me completely without care at all if I didn’t have such a good family, plus succeeding in this role would have put them in pole position for a future 2 day role. I don’t understand the attitude where you can do that, I was brought up to respect people and treat them right, it seems not everyone is, it left me feeling really pissed off.

Fortunately it’s not all a complete catalogue of disaster as Interviewee 5, Lisa, has started successfully after being offered the 2 days a week post we were recruiting to. Additionally as a bonus she also seems to get bizarre random me.

We are still recruiting, as it would be useful to have an additional backup carer in the team, but it’s not something we’ll rush into as we need to make sure we get the right reliable person, in the meantime my brother will be able to cover most leave and sickness as he doesn’t now have a major daily care commitment. My brother still won’t get off that lightly, and I don’t mean that in the sense that I will make all my carers sick so that he has to work, I mean it in the sense that I will still find him things to do, for as well as taking me to hospital appointments etc. he’ll still have still have to transcribe my new poems for your delectation, do web updates and get back to working on my book. My book, I promise it will happen one day but I can’t say when and currently for me keeping my brain active and distracted doing new poems is more important than getting my book done quickly. It is more important to get my latest poems up on the web so I can start newer ones because this helps me stop my brain concentrating on the compulsions I have, rather I can use my brainpower to more constructive ends. Poems being more constructive because my compulsions tend to have cumulative negative impact, as they are based on, and reinforce anxiety, which fuels lack of sleep, which in turn fuels anxiety, in a nasty negative spiral.

I alluded to some of my negative compulsions in my last poem, Sylvie Wright, An Extremely Stubborn Bitch, primarily the compulsions to burp and eat watermelon. These are both done to alleviate nausea in my stomach; the feeling of which the doctors have told me is a learnt behaviour, a compulsion. I find this hard to accept even though more than once doctor has said this to me. As a result of me not accepting what the doctors are saying we have to come to one of three conclusions, either that

1. I am wRight and the doctors are individually wrong. This has happened before so we can’t totally rule it out.

2. I am wRight and doctors are wrong and are deliberately and meanly ganging up on me to persuade me from the path of burping righteousness.

3. I am wrong and the doctors are right.

Mmm, I wonder which is the most likely, probably that I am wRight, yes definitely probably that, but just in case it’s not, I’m seeking advice about having compulsive habits even though I’ve never been known to show those habits in the past; no never, you have no evidence, I’m wRight, I’m always Mrs wRight.

Continuing on a health theme, I need to update you about my broken leg. We’re now a year on from when it happened, I can hardly believe it’s been so long, and while the leg is healing slowly it hasn’t healed enough for me to have been discharged from the fracture clinic yet. The primary reason that it hasn’t knitted together fully as of yet is that I never put any weight on it, and pressing weight on leg bones when walking or standing helps them fuse quicker. I am due for my next progress check at the fracture clinic in April, when perhaps they’ll say they don’t need to see me again; here’s hoping. Continuing with leg news, I’m still using the same pot so no interesting change of pot colour news, I’m afraid.

In regards to my health funding, you will remember that recently I reported to you that the latest

decision was that I should be moved to joint Health / Social Services funding, from Health Care only funding and that we we’re waiting for CHC (Continuing Health Care) to come back with a revised budget that we and Social Services could work to, for my care going forwards; well the outcome of that wait has been 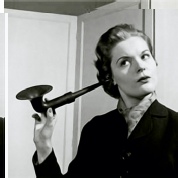 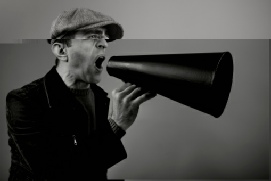 Yes, that’s right we and Social Services are still waiting for a decision from them, no real surprise as we already knew that CHC was useless.

Also remember last time I also reported that we we’re waiting for my next reassessment by CHC staff, which was due at the beginning of July, and promised by CHC by the end of June. The outcome of this wait has also been

No, we haven’t heard anything from them on this either.

So we can add to the CHC’s list of strengths, they now can be listed as

It may sound bizarre but I am now happy with their

The good thing about now having more carers employed to do less days each, than the carers were previously doing, is that I now have a good balance where they don’t have to deal with too much of me.

AND I DON’T HAVE TO DEAL WITH TOO MUCH OF THEM.

We are now in the dark cold days of February, which although slightly brighter than December and January days are not great for me going out further than a quick trip to the shops, going up to Grandma’s or getting Marcus from school.

As usual I intend to get out more this year than last, and as I have been feeling slightly more positive since Christmas I think there is a good chance of this, though this does not mean I did nowt in 2016.

For example I went for a walk, well roll, by Damflask Reservoir near Bradfield with Tasha and my family in August, and in answer to your question Mr John Shuttleworth, yes I did check the level, but sorry no picture of me doing it, so you’ll just have to trust me on that, sir. 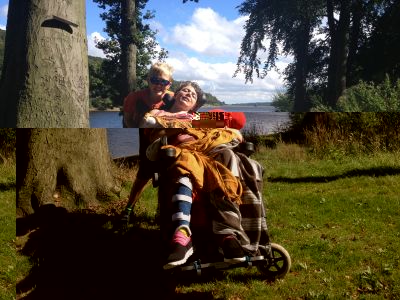 Marcus and me at Damflask

I also made it to Forge Dam at the time when Sheffield was stampeded by Elephants raising money for Sheffield Children’s Hospital, as you can see Marcus was worn out by his running out of the way of their enthusiastic charity raising. 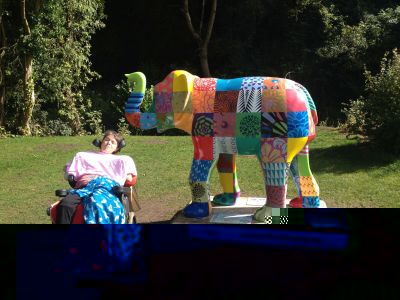 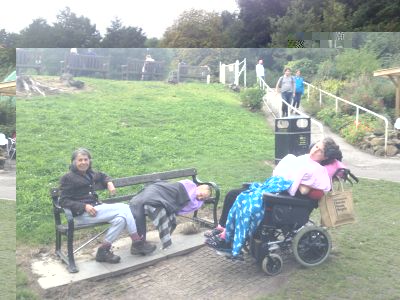 At our regular haunt of Millhouses Park 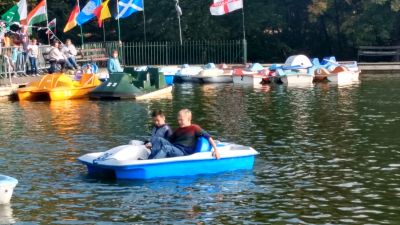 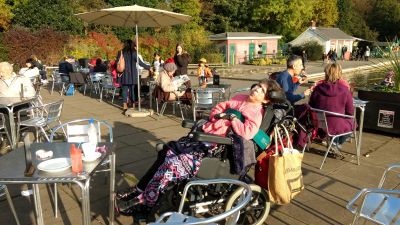 Fortunately for Marcus it’s not just me who takes him out as Tigga, Jacqui and others also do. A trip he especially enjoyed was to a trip to an arcade in Bury with Jacqui and some her friends. 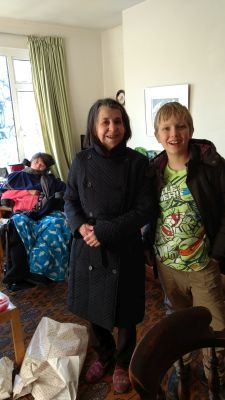 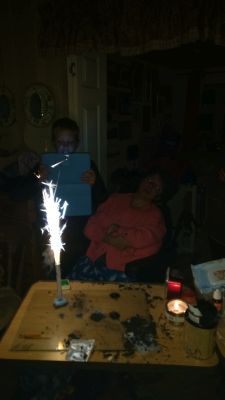 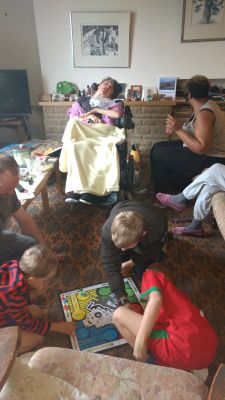 A lot about living positively is about appreciating life through a positive attitude to life and through positive actions in life, in spite of adversity, and about the positive realisation that no matter how bad things may seem, that one is lucky compared to how it is for many others.

My friend Jacqui sent me a link about this guy whose life story has made my struggles look like a walk in a park in comparison to his; in my opinion, you might not agree, but this guy’s attitude made me think wow, and it also made me feel very humble, because his story is 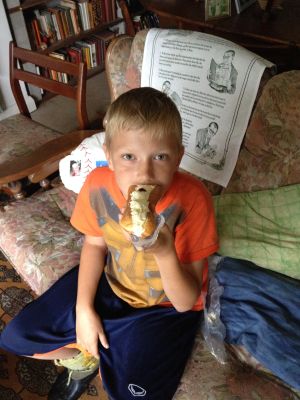 Ok that photo’s my little joke; it’s really great how both my boys now naturally eat in a healthy way.

I’m keeping up my munching habits by eating 4 meals a day along with my single Fortisip.

Oh I nearly forgot, I had a really good birthday that included me having a happy birthday  serenaded in the middle of Sheffield. It was great.

That’s it for now 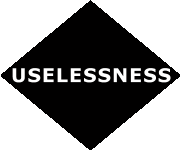 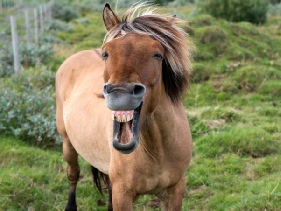 The above video should play in most web browsers.

We also enjoyed doing indoor fireworks on bonfire night, being up at Grandma’s at various times including at Christmas and her birthday. 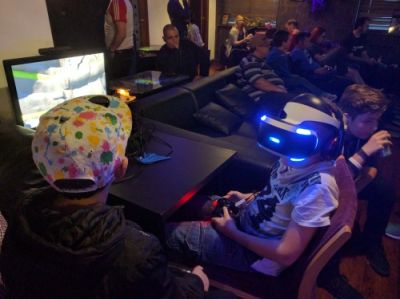 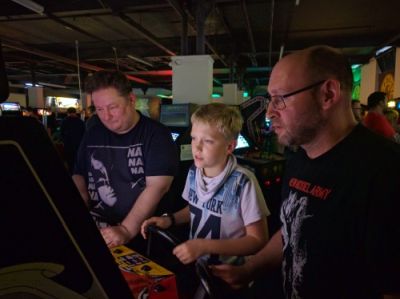 To understand why I say this visit https://unstoppable.me/life-lessons/?utm_sources=facebook&utm_medium=Social&utm_campaign=SocialWarfare

I will try and keep mesen in a more positive attitudinal state, by working on new poems. My latest poems are at www.livingwithms.co.uk/poems3.html

Marcus is a healthy eater, as is his dad; it makes me proud to see them both munching on raw vegetables and out-healthy eating me. See photo below for my evidence.