As most of you know I am always up to something crazy to raise money for my favourite MS Charity, MS-UK (formerly The MSRC)

Well this year, on Sunday the 3rd of April 2005, I'm doing a tandem hang glide!!! Not only that, for my own personal marathon challenge we will attempt to reach a height of 2620 feet (the equivalent to the 26.2 miles ran in a marathon)!

It is going to be quite a RIDE, and yes, I am nervous!!! I've been reassured I don't need my legs much, but have also been advised not to eat much breakfast as it can get pretty gusty up there!

If you want to suppost me you can sponsor me by visiting my online fundraising page: www.justgiving.com/sylvieshangglide

Wish me luck! Hopefully I'll be letting you know how I get on!

On the evening of Wednesday the 13th of April, 2005, I achieved my hang gliding dream! At last the weather was perfect with very little wind so we went for it!!!

At 7 pm I had a chat with Stewart Bond, my instructor at the Icarus School of Hang Gliding. 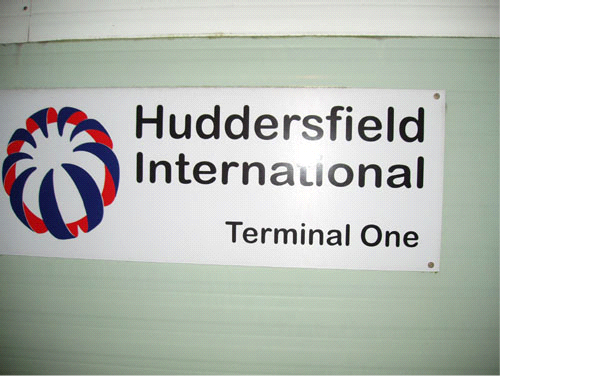 Then, next minute, I was getting kitted up! First I had to put on a lovely warm body suit, and then fit my way into the harness, which is a very snug fit....you have to make sure your head and limbs fit through all the right holes. It was quite daunting. By the end I felt like the Michellin man! 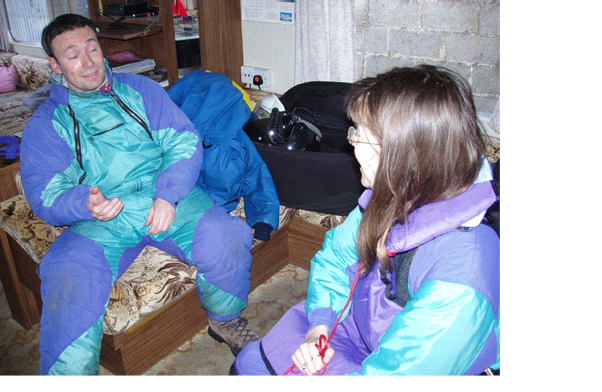 Next, after a quick briefing, we travelled by car across the airfield to the hang glide. 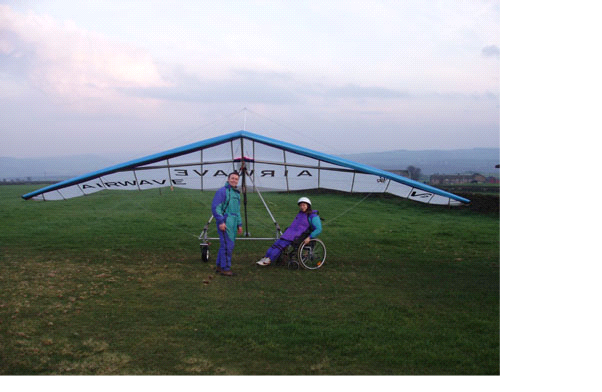 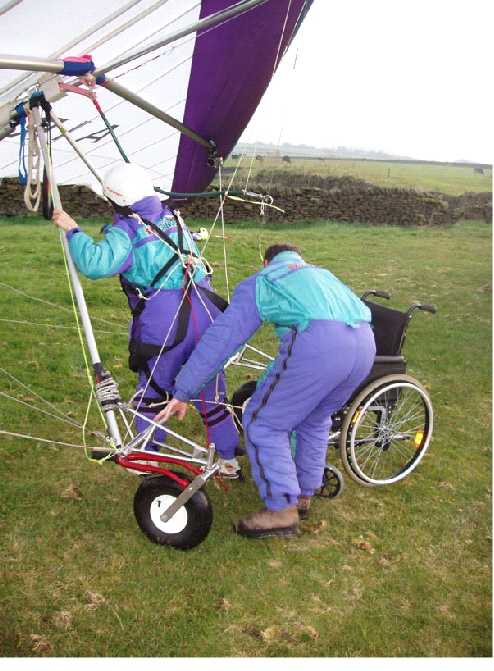 Getting into that way not easy either, and then I hung there a bit like a fish on hook- but the good news is that I felt very secure! They decided to tie my legs together too for extra security (My partner Steve called this altitude bondage!!!). 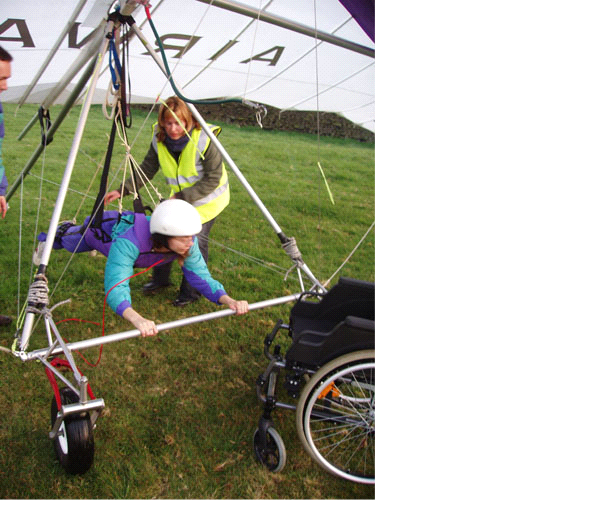 Most people manage to cross them and keep them crossed but it was a safer bet for me to do it this way. Even paraplegics can hang glide you know. In that case their legs are simply tied to those of the instructor! 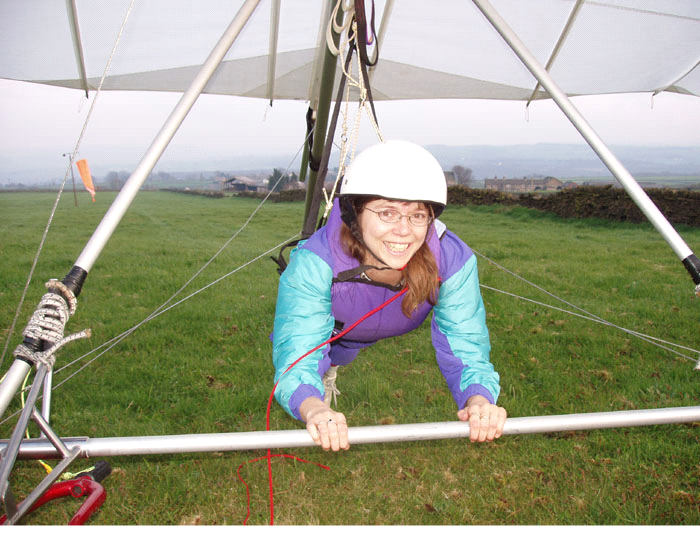 Stewart took up his position in the harness and I put on some warm gloves. Stewart was hanging just below me and I was instructed to put my right arm around his back and hold onto his shoulder strap, and my left hand was to hold onto his wrist. Stewart then realised that, in order for him to be able to press the remote control button to activate the camera located on the far left wing of the hang glide, he was going to have to sacrifice his gloves!!! The brave man! 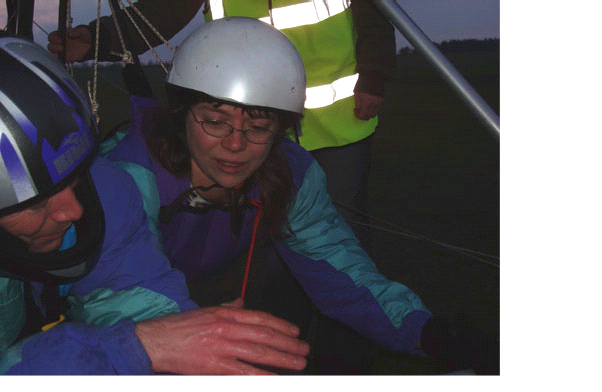 The hang glide was attached to a microlight plane by a cord and the plan was that this small plane was to tow us up to the height we were aiming for (2620 ft) and then release us.

Next minute we were off and within seconds we lifted off the ground. The strange thing was that it felt so natural. I wasn't nervous. I just enjoyed the thrill of it as we rose higher and higher.

The views of Huddersfield and the countryside surrounding it, the tiny airfield, the tiny fields, the spots that were cows, sheep and trees, were spectacular! I could not stop grinning and chatting to Stewart over the loud humming of the microlight. I was also surprised by how smooth the flight was. We were very lucky with the low winds that evening!

As we rose higher and higher it did get colder and colder (particularly my feet) but that did not bother me, the views were so glorious! I did try to cover Stewart's left hand with my gloved hand to protect him from the chill up there, and this did help him a little- but he took the cold like a man!

Then, after a signal from the mircrolight pilot, indicating we had reached our target of 2 620ft, I ducked my head, as the chord attaching us to the plane was released...and then there was complete silence. It was so peaceful! We were just flying through the air like a bird! The experience was like a dream! 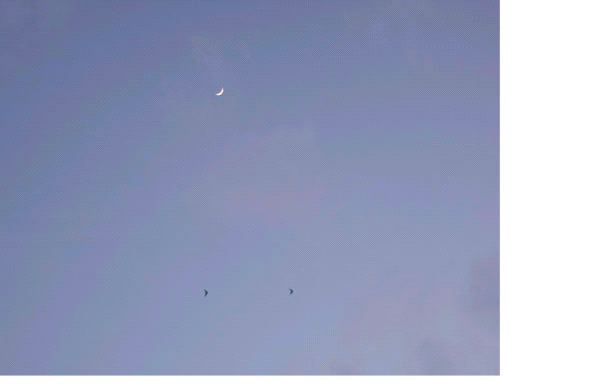 Stewart wanted to then take a few still shots of us using the remote, but unfortunately, when we turned to look towards the camera, we found that the wind had blown it off course, so it was no longer pointed at us. So poor Stewart had frozen his hands for nothing. I think they call that sods law. I didn't mind too much because I knew I'd remember this experience and the views for the rest of my life! The streetlights were now just coming on in Huddersfield as it was getting to dusk and it was most picturesque!

Next, Stewart asked me if I'd like to try steering the hang glide. To do this you had to push on the bar, either on the left hand side to go left or on the right hand side to go right.
I had a go but my attempt was pretty feeble. As I was above Stewart steering required that I apply even more pressure to the bar. I steered a little and it was fun to try anyway!

Then I agreed with Stewart that we should do some acrobatics. This involved pushing the bar forward and then we were plunged into a freefall dive and we swirled about at angles of up to 90 degree! Though very disorienting (I was convinced we had gone upside-down several times!) I enjoyed this totally mad experience. Some people would hate it but I loved it. It was very surreal.

In doing these stunt we lost a lot of height very quickly and before I knew it the ground was getting closer and closer. Stewart steered us beautifully towards and onto the runway and told me to look up as we touched down, as the ground would rush up upon us. I looked up, held my breath and we landed perfectly safely and smoothly but I'm glad I took his advice because the speed the ground came upon us was very daunting. Looking down would have been very unwise! 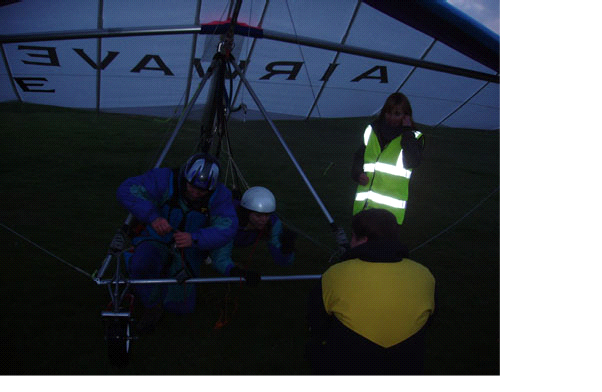 Everyone could see just how much I'd enjoyed the experience of hang gliding and everyone congratulated me! Stewart then dismounted and I was left hanging there, whilst folk made a few jokes about their work being done and how they were off to the pub. But then they took pity on me and released me.

My mobility was much improved thanks to the cold and I felt confident about stepping over the bar to get out (I'd had help lifting them in getting in). However my legs did not want to lift and we then all realised that they were still tied together. We all ahead a good laugh about that.

I was untied (fun this altitude bondage!) and given a hand back to the car and back to the cabin. I was on a total high and could not stop smiling. The hang gliding experience had lasted around 20 mins in flying time and had exceeded all my expectations!

I would recommend it to anyone!

Thanks to all who sponsored me!
www.justgiving.com/sylvieshangglide